​​“Our Father in heaven, we are very grateful for this opportunity that you are offering to us. Though for a long time now we have had the need to learn how to read and write, until now we had never been given the chance.”

In the Democratic Republic of Congo, more than 200 adult-literacy teachers have received training in the Evangelization Through Literacy program initiated a year and a half ago by women leaders of the three Congolese Mennonite denominations. The new teachers are already teaching more than 1,500 adults to read and write in the principal Congolese languages.
Many of the 61 participants in the August 2018 teacher training in Tshikapa, Western Kasai Province, came from regions where, until recently, war raged among insurgents known as Kamwina Nsapu, government troops and militias, and various tribal groups.

Among them was Pastor Homer Kasanda-Bende, who serves in a village 20 kilometers from the Angola border. In a break from the intensive week-long training, Pastor Kasanda-Bende told his story.

“I was captured by the Kamwina Nsapu,” he said. “They held a gun to my head. I was sure I was going to die, like so many others. One of them said to me, ‘I hear you are a pastor. Is that right?’ I said it was true. Then he said, ‘If you are a pastor, pray to your God and he will make you vanish.’ But I told him, ‘The glory of God is not magic. It is within me.’”

Kasanda-Bende said that the leader of the insurgents decided to let him go and told his followers, “If you shoot this man he will die but things will not go well for us.”

The pastor was eager to take his new teaching skills back home to people whose lives had been disrupted by the violence. “We had ten [Mennonite] congregations in the region,” he said. “Now we have only seven. Many people fled to Angola during the war and they are just now coming back. Many older people had never learned to read and write and the young people had to drop out of school.”

Many of the Tshikapa trainees, including eight newly ordained women, were pastors and educators who were quick to grasp the adult-education principles prescribed by the Literacy International instruction methods, under Congolese instructor Rev. Timothée Sila.

Adolphine Tshiama, president of the women of the Mennonite Church of Congo and herself a former teacher and principal, helped drill the trainees in the rigorous method until late in the evening. These extra sessions were followed by prayer and singing. 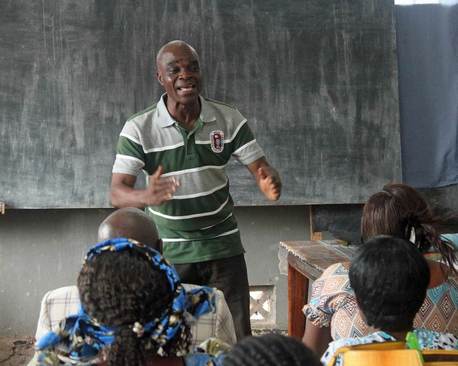 Joseph Nkongolo facilitates literacy teacher training in Mbuji Mayi in April 2018
As a result, more than a third of the participants finished the final exam with distinction, a portion Rev. Sila said was unprecedented in his experience. At the top of the class was one of the ordained women, Rev. Marie-Louise Ntumba, 65, a graduate of the Kalonda Bible Institute. Workshop leaders were especially pleased that the trainees who excelled, such as Pastor Kasanda-Bende, came from even remote sectors of the region.

Meanwhile, graduation ceremonies are being held for the newly literate students of the volunteer teachers who have formed classes in the past year and a half in other parts of the country.

Among them is Kizela, a woman in Kikwit who suffered paralysis from polio as a toddler and never went to school. In August Kizela wrote a letter in Kikongo thanking those responsible for her newfound skill, which allows her to read the Bible. She compared herself to a blind person who is seeing for the first time. Another proud new reader/writer, a widow named Anselme, sent pages of neat homework with Mennonite Brethren leader Rev. Marie Fumana to show her skills.

The texts incorporate Bible lessons, and teachers are encouraged to express love and support for their students as well as their own testimonies. Many students are already members of the congregations where classes are held, but others from the neighborhoods are also being drawn to the churches.

A typical report, from Pastor Consolette Mulonzo of the Mount Sinai congregation in Kinshasa, lists 45 students, 35 of them “regulars” who have completed 57 lessons in the past six months and are ready to take the competency exam. One has joined the church.

New teachers in both rural regions and cities report overwhelming demand for their services. While the first round of teacher trainings has been completed, with the support of Africa Inter-Mennonite Mission, project leaders in Congo request prayer as they meet soon to consider next steps to address the needs.

Support for this project may be directed to AIMM, designated “Congo literacy.”

Nancy Myers serves as a liaison for AIMM with the Congo Literacy Project in D.R. Congo. 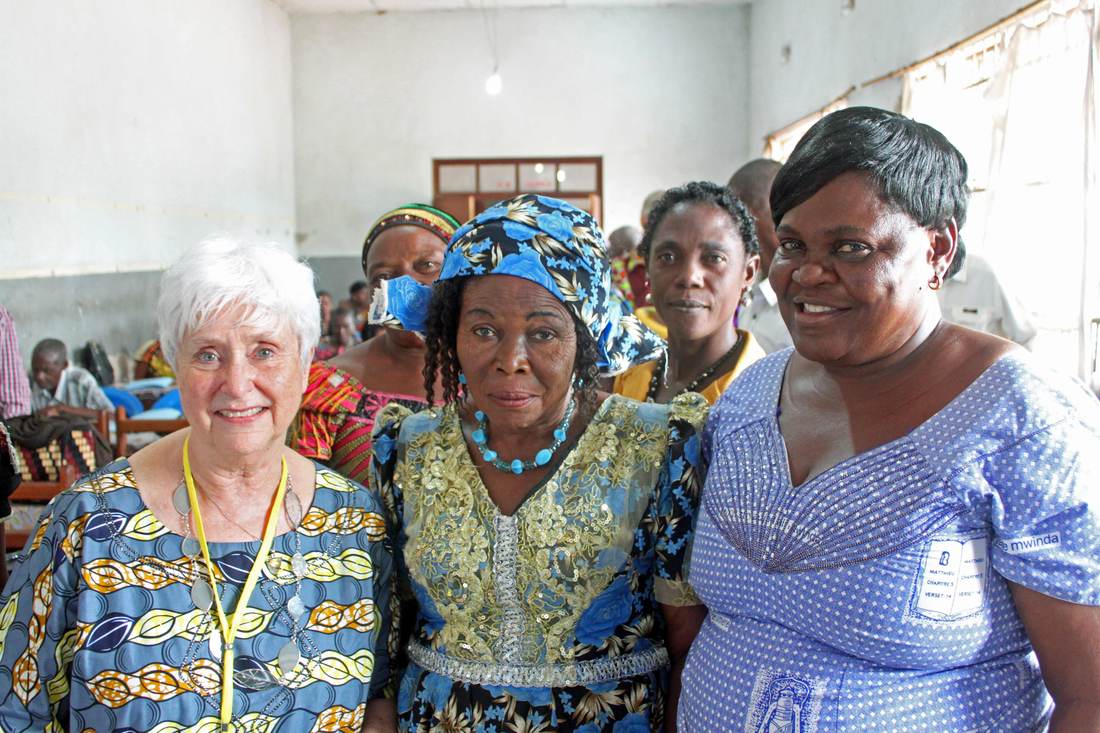 Nancy Myers, Fidélie Nkita Mbombo, and Hélène José Mbombo at the literacy teacher training in Mbuji Mayi, DR Congo in April 2018. All three of these women have been actively involved in organizing the literacy project.