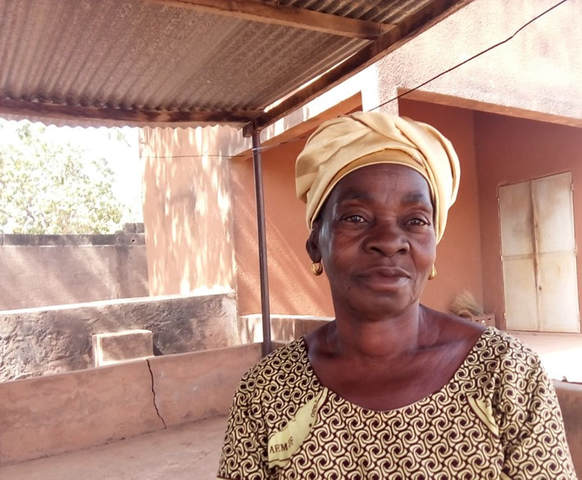 Before the arrival of the microloans program, I already was involved in making sumbala, a West African spice made from seeds of the néré tree.  [Editor comment: The fabrication process involves boiling, cleaning and then packing away to ferment - the fermentation process giving it a pungent smell. Salt can be added to the finished product to facilitate storage life.  This condiment is traditionally sold in balls or patties that can be kept for several months at a time in the case of the best quality. It is a traditional ingredient used across West Africa. The traditional production now faces strong competition from low-quality stock cubes. Sumbala is rich in proteins and a variety of dietary minerals, which are completely absent from these bouillon cubes. In recent years, however, good quality commercial production has allowed the product to make a comeback into everyday cuisine.] But I was unable to purchase the seeds in large quantities.  With the microloans program, I have been able to increase production.  I began with a loan of 25,000 FCFA ($50); then 50,000 FCFA ($100); and now 75,000 ($150).  At first I was able to buy one can (West African unit of volume) of néré seeds before I benefitted from the microloans.  Now I am able to purchase 1 tine (10 cans; perhaps a bushel) at once.
Among the advantages of the microloans project for me:  I can take care of my own financial needs; I help my family by paying for spices (in Burkina Faso culture, all food costs including spices must be covered by a weekly or monthly cash envelope that a husband must provide to his wife); in 2016 I was able to cover the school fees for my child; I also have the joy of being able to contribute something to the church by way of tithes and offerings.
This project is to be encouraged because it helps us to leave our financial weakness behind.

​Souleymane Traoré was in great difficulty.  He had a wife and three daughters to support, but he was seriously ill, and he was living in Burkina Faso’s capital city of Ouagadougou, the most expensive place in the country.
He decided to return to his home village, Samogohiri, where most of his larger family resides and where he thought his immediate family would be taken care of while he continued to fight his illness.  When they arrived, they joined the local Mennonite church.  The story continues in Souleymane’s own words:
​
“Because of my illness I couldn't work and I was obliged to depend on my larger family, who treated me badly. My wife and daughters worked with them on the farm, but no one gave account of the profits of this work, or thought to give us something like pocket money. Our sole benefit was that we all received meals from the family. The worst part was that my wife and my children were often obliged to go to the field with others and not to the Church on Sunday, because we depended on this shared work. In sum I will say that I have lived painful moments with this dependency. But, the Lord in his sovereignty has given me a way out.

While I was still experiencing this difficult situation, the Evangelical Mennonite Church initiated the system of micro loans in 2013. I was interested, and decided to borrow 150,000 cfa francs ($300). Wondering what to do with the loan, I swung between the grains trade and hardware. The Lord eventually convinced me to try selling hardware.  When I received the loan, I entrusted myself to fellow church member brother Bala Sourabié, from whom I purchased a few items including paint.  I made a small table to showcase my goods. Given my inexperience and the winter season, I was not able to repay the entire amount that first year and I explained that to the Loans Monitoring Committee. The following year, I took my courage in both hands and God helped me to repay it with double interest.
I've learned from this initial failure. With the rest of the items and with the support of Bala, I’ve climbed back up the hill. After beginning with the small table, I ended up building a small house in which I placed shelves. Currently I am considering building another house because the one I have is too small to contain my merchandise. In addition, the 2016 round of microloans gave me additional purchasing power and reinforced my need for more space.

From the larger family compound in which we had been living, I also moved with my family into the courtyard of the Church. The high point of all this is that I have rediscovered my physical, moral, and spiritual health.  I found health at all these levels because all the persecution I endured in the moral and spiritual areas because of my faith, is no longer happening. The 'microloans' program of the Evangelical Mennonite Church was very beneficial for me and my family. We are able to meet our needs including daily bread, schooling for children, clothing, and health to name a few.  We can give thanks to the Lord, and also say thanks to the initiators and managers of the microloans program, which is a real growth producer for the Evangelical Mennonite Church of Burkina Faso.”

Democratic Republic of the Congo